Another Perspective: Infant Mortality and Micronutrition 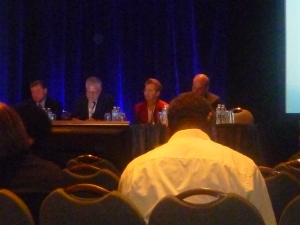 This eye opening talk focused on zinc, the largest micronutrient deficiency of the developing world that has the greatest impact on infant mortality.

Dr. Black was followed by Dr. C Larson, a McGill Medical Graduate and specialist in paediatrics and public health. He spoke of international efforts to scale up zinc treatment in an effort to curtail the insidious effects of childhood diarrhea. So far international efforts have achieved a 10% coverage in rural areas. The greatest challenge he claims is that such initiatives must have sustainability and it is difficult to distribute resources to the mouths of those who are most in need without creating disparity.

Next, Dr. S Horton stepped up to the microphone to speak of the economics behind micronutrients. She discussed the Copenhagen Consensus of 2008, which she describes as the “olympics for economists”. Occurring every 4 years, it is a meeting where ten of the most eminent economists in the world meet to answer the questions of how to best advance global welfare supposing there was $65 billion at disposal over a four year period. The last meeting in 2008, which included five Nobel laureates, concluded that micronutrient supplementation for children, specifically vitamin A and zinc, would have the most impact. According to Dr. Horton, the international community is making an effort to prioritize these interventions and implement changes as part of a broader international policy effort. Such efforts are funded in increasing order by the international private sector, the domestic privates sector, domestic governments, and mostly importantly by international donors.

Dr. Mark Fryars, Vice President of the Micronutrient Initiative wrapped up the session on the importance of strengthening in-country capacity to scale up micronutrient interventions.  He started his powerful presentation with a quote by Richard Kohl; “start with the end in mind”.  Scaling up is not simply about  “coverage or about products,” he said. “It’s very much about impact. There has to be a constant and major focus on those truly in need”.

One of the conditions that are implicit in this is that sustainability is vital and that coverage needs to encompass those truly in need, and not just those in reach. He discussed the important lasting capacities and capabilities needed to implement a scale-up program. The road for such projects seems clear cut; scientific evidence –> show proof of concept –> scale up –> sustain long term; but in practice is not so straight forward. In essence, political commitment, distribution, proper uptake and utilization, affordable prices, accessing the right people, proper providers, promotion, business processes for engaging conversations between providers and consumers, and finally complexity and diversity of partnerships are all crucial factors. He particularly stressed the need of secure partnerships which in and of itself is a discipline, a skill, a science even, requiring a wide array of interdisciplinary efforts and collaborations.

To summarize, zinc supplementation in areas that have a high rate of deficiency has positive, significant benefits in reducing mortality and improving quality of life yet the path to going upscale is complex and takes time. The most important point is that in the process of up-scaling we do not lose sight of the ultimate goal which needs to always be people-centered.

This entry was posted on Monday, November 14th, 2011 at 9:05 am and is filed under 2011 Global Health Conference, Selected Day 1 Sessions. You can follow any responses to this entry through the RSS 2.0 feed. You can leave a response, or trackback from your own site.